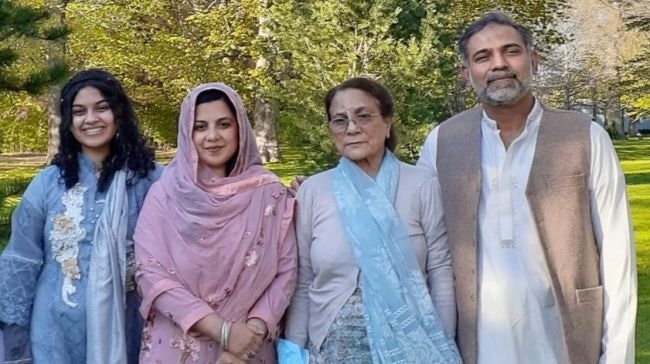 TORONTO — Canadian Muslims expressed both doubt and cautious hope as the federal anti-Islamophobia summit is being held in the wake of a horrific vehicle attack on a Muslim family in London, Ont.

Jasmin Zine, one of the speakers at the summit, has been researching Islamophobia for more than 20 years and has strong doubts that the government will deliver on tangible change.

“The proof will be in the pudding if they are actually going to put some meaningful consideration and effort behind making recommendations actionable,” Zine, a professor of sociology at Wilfrid Laurier University in Waterloo, Ont., told CTVNews.ca in a phone interview.

MPs voted unanimously in favour of a motion calling for a national summit a few days after the June 6 attack on the Afzaal family in London, Ont., which police say was motivated by anti-Muslim hatred. The one-day summit on Thursday follows a similar one the government held on antisemitism Wednesday.

Many Muslim groups and speakers attending Thursday’s largely virtual summit are putting forth their own proposals to tackle Islamophobia and anti-Muslim hate. Earlier this week, the National Council of Canadian Muslims, which has been spearheading the summit, released 61 policy recommendations, which included:

“Governments attending the summit must know that we want more than their attendance. We want to see their commitment to timelines,” Mustafa Farooq, the CEO of the NCCM, said during a press conference on Monday.

But Zine, who’s been a part of various government hearings and summits since 9/11, says the way the government timed and organized this summit doesn’t inspire confidence.

She felt it was “disrespectful and unacceptable” to schedule it during the Muslim holiday of Eid al-Ahda, and was upset by the short notice she and others were given, with a government staffer only inviting her to speak a few days ago.

Despite many invited guests having good intentions, she can’t help but feel “we’re just there for a dog and pony show.”

She also said policies proposed at the summit could be put on the backburner or potentially ignored in case of a fall federal election, adding that any tangible actions will also depend on which political party forms government.

She said these potential roadblocks are unwelcome given the troubling spike in anti-Muslim attacks across the country. “The Muslim community is dealing with a lot right now in terms of very tangible, existential fears for safety,” Zine said.

“The reality is that Canada has suffered more mass killings motivated by Islamophobia in the last five years than any other country in the G7,” Farooq said at Monday’s press conference. “This cannot be allowed to continue.”

FAULT OF GOV’T BEING OVERLOOKED: ACTIVIST

Zine and others have their doubts because they say there hasn’t been any government acknowledgement that its policies over the years have contributed to “a climate of Islamophobia in this country.”

Azeezah Kanji, a community activist, legal academic researcher and writer, said government discourse is “overlooking the central role of the Canadian state itself — particularly in the context of the war on terror — in legitimising Islamophobia and the demonizing stereotypes of Muslims.”

Kanji also criticized the 2015 Harper-era “Zero Tolerance for Barbaric Cultural Practices Act,” which claimed to protect immigrant women and girls by criminalizing forced marriages and barring migrants into Canada if they practice polygamy. But critics say it unfairly perpetuated stereotypes.

She also said some proposals involving policing powers at the summit could end up “backfiring on the very communities that they’re intended to protect.”

Kanji will instead be looking for government commitments to end systemic racism within state powers themselves.

She worked with the Ottawa-based non-profit International Civil Liberties Monitoring Group to come up with its own proposals, some of which overlap with NCCM’s.

These include the release and collection of disaggregated race- and religious-based data by the government; and reviewing how the Canada Revenue Agency works with national security agencies to carry out its audits, which critics say happens with little accountability and have disproportionately affected Muslim charities.

Rania Lawendy, director of junior youth at Muslim Association of Canada (MAC), shares many of Zine’s and Kanji’s concerns but said she is “cautiously optimistic” about the summit.

MAC is bringing forth its own proposals, based on weeks of consultations with some of the 150,000 people from its dozens of affiliated-community centers and Islamic schools across the country.

“We know that the community does not have an appetite and is not willing to just have dialogue. There has to be real action that comes out of this summit,” Lawendy said, adding that Muslims communities won’t accept anything less.

“The real work happens after the summit is complete,” Elghawaby, a columnist and board member of the Canadian Anti-Hate Network, told CTVNews.ca in a phone interview, adding it’s the upcoming weeks when elected officials across the board put “their money where their mouth is” and advance recommendations.

NCCM, for its part, is pledging to issue a document 60 days after the national summit asking governments to indicate a timeline for achieving goals.

Elghawaby urged grassroots groups to not give up on their advocacy during a potential federal election.

“It’s up to our communities, our allies, and regular voters from across communities to expect from candidates — who are running for public office — to make commitments towards improving the experiences of minority communities in the country.”

Kanji, who’s also director of programming at the Muslim Toronto-based Noor Cultural Centre, was blunt about her expectations.

“I’m never optimistic about the willingness or the capacity of the government to initiate change,” she said.

“But where my optimism does lie is with Muslim communities and allyships who hopefully are now more galvanized around the issue of Islamophobia and will continue to press for the deep seated changes necessary.”