‘How many deaths need to happen?’: Canada has a troubling anti-Muslim hate problem 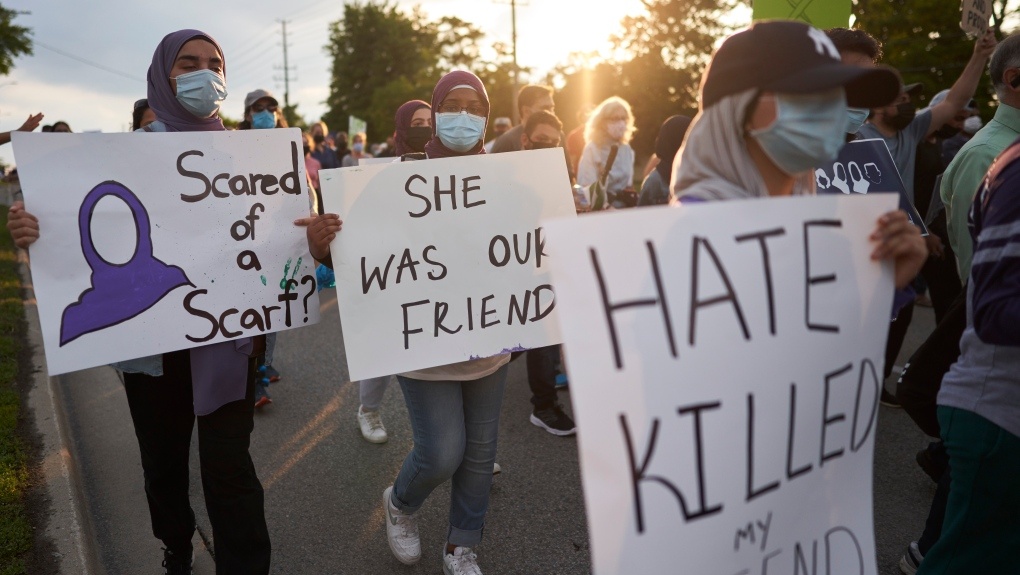 Last summer, staff at a Toronto mosque picked up pieces of glass after their windows were shattered for the second time in days. A few months later, a 58-year-old man was stabbed and killed outside a nearby, but different, mosque. A month after, a third mosque receives threats that its congregation will be the target of a mass shooting.

This is the treatment Islamic places of worship in Toronto face. A similar, sometimes worse, picture can be painted in cities across Canada, a country that prides itself and deeply benefits from its multiculturalism and diversity.

These incidents, amid others, were the precursors to a vehicle attack in London, Ont. that killed four members of a Muslim family, and left one child fighting for his life — an attack police say was an act of hate.

Nathaniel Veltman, 20, faces four-counts of first-degree murder, one count of attempted murder and terrorism charges in connection with the attack. Police have said they believe Veltman did not know the family, but targeted them with his vehicle because of their Muslim faith.

Rania Lawendy, the national director of the Muslim Association of Canada, the organization behind a Toronto mosque that was vandalised six times over the course of the COVID-19 pandemic, said the London attack, while horrifying, did not come as a complete surprise.

She said anti-Muslim hate and Islamophobia did not grow overnight in Canada, rather neglect and purposeful escalation of the issue by leaders has made it become a deeply embedded part of the country’s cultural and political fabric.

“This man in London, he picked a random group of Muslims. He had no connection to these people and just decided to run over three generations at one time. That is not isolated. That does not happen in a vacuum,” Lawendy said. “What would cause a 20-year-old to have that much hate inside him that he would throw away the rest of his life to kill these people?”

“How many deaths need to happen before we wake up?”

Yumnah Salman, 15, her mother Madiha Salman, 44, her father Salman Afzaal, 46, and her grandmother Talat Afzaal, 74, were killed on June 6 when they were hit by the vehicle while out for a walk in their neighbourhood. Yumnah’s brother, Fayez Afzaal, was just recently released from hospital.

Lawendy said most Muslims have experienced some form of hate in Ontario. She said people have told her “to go back home” and her hijab has been yanked off by Islamophobes. She said she’s heard countless stories similar to hers from other Muslims, especially from women in the community who are more often targeted due to their hijab.

“There’s no ulterior motives other than them being Muslim,” she said. “It’s our political leadership who is responsible for allowing this polarization to take place, and the years of public discourse have created this anti-Muslim hate.”

“We’re saying enough is enough and anyone trying to downplay it really should be ashamed, because it’s manifested in the death of Canadians.”

Shortly after the London attack, The New Democrat leader Jagmeet Singh made a speech at the House of Commons, saying that it’s wrong for people to say anti-Muslim hate is not a part of Canada.

“The reality is, this is our Canada … Our Canada is a place where you can’t walk down the streets if you wear a hijab because you will be killed,” he said.

The Muslim community has been on edge since the attack in London. In vigils across the province, drawing support from each other and people outside their community, who stood in solidarity with them, they shared their grief and worry.

However, it hasn’t helped that since the London incident, a Muslim woman was attacked in Edmonton and two people allegedly tried to break into a mosque in Scarborough, threatening members while doing so.

Some experts say Islamophobia and anti-Muslim sentiment has become almost a norm in Canada, and that violence, hate and willful ignorance toward Muslims is often overlooked, excused and accepted on both a social and political level.

The Muslim community and its supporters are calling politicians to take a tougher stance on overt and covert Islamophobia, saying that bills and policies targeting people of faith should be urgently stopped because they fuel hate and fear.

“There’s no consequences, or not significant consequences, for expressing hatred towards different groups of people, including Muslims,” Evan Balgord, the executive director of the Canadian Anti-Hate Network said. “And so, people feel more free to express their discriminations, their prejudices and their hate.”

Balgord said another example of anti-Muslim hate not being taken seriously in Canada is the way members of the federal parliament responded to the non-binding M-103 motion, which among other things called for the House of Commons to condemn Islamophobia. In March 2017, 91 MPs voted against the motion, including the majority of the Conservative caucus—and Erin O’Toole, who is now the party’s leader—citing freedom of speech concerns. MPs adopted the motion by a margin of 201-91.

“It really sends a message that that is not important, that it is not significant. That it is just a fact of life that people from communities that are targeted with hate have to live with,” Balgord said.

Aside from taking action against Islamophobia, Balgord said often times politicians themselves fuel hate toward Muslims by implementing discriminatory policies and expressing skewed perceptions of the community. He said leaders who do not stand up against such policies and speech also add to the fire.

Advocates are specifically calling on the federal government to stop controversial Bill 21, saying it sends a message across the country that discrimination against certain groups of people is okay. The bill, passed in Quebec in June 2019, forbids any employee of the state, including judges, police officers, or teachers, from wearing religious symbols at work.

He said the hate in Toronto and elsewhere in Canada is also fuelled by negative portrayals of Muslims in mainstream media and racist and discriminatory content on other online platforms, as well as the proliferation of far-right terrorism.

The federal government has promised to bring in new legislation to tackle online hate, but Balgord says it needs to be introduced immediately as there’s no time to waste.

In the aftermath of the Christchurch attack, which resulted in the killing of 51 Muslims at two mosques in New Zealand, the country created a royal commission to examine the media and content the terrorist consumed. The same needs to be done here in Canada with the London attack, and other incidents, Balgord said.

‘TRUE TEST’ IS WHAT HAPPENS NOW

The CEO of the National Council of Canadian Muslims, a civil liberties group, said the “true test” of governments is to see how they respond following the attack in London. Most political leaders spoke out against Islamophobia following the attack, but the community is looking for action to take place and not just words.

“The test of governments, the federal government, and the provincial governments, will be whether they will actually pass things quickly,” Mustafa Farooq told CTV News last week.

“We have been calling for a national action strategy to dismantle white supremacist groups. Four out of the 300 that are active in Canada were dismantled. That’s an important step, but that’s only four. There are many more that remain.”

Lawendy echoed that an Islamophobic culture continues to thrive in movies, media narratives and online spaces that dehumanize Muslims.

According to a 2017 Angus Reid poll, 46 per cent of Canadians have an unfavourable view of Islam. Lawendy stressed that the negative sentiment and hate is not often driven by people’s daily experiences with Muslims, but rather fueled by the dehumanized portrayal of them in the media, online world and political stage.

In the aftermath of the London attack, Canadian Anti-Hate Network posted an article to their website about the online response to the killing. It details racist, hateful and discriminatory comments and videos published following the death of the family, while the nine-year-old boy remained in hospital.

Lawendy was at the vigil for the family in London last week. She said that despite the incredible sadness, there were some feelings of hope as people from all walks of life came to the mosque to pay their respect.

Despite that hope, she said she does not doubt that what in happened in London could happen in Toronto. She said it starts with vandalism, broken windows and break-ins.

While commending police in London for their swift action and clear statement on the alleged motivation, she said often times police are unable to even recognize hate crimes, and do not handle violence targeted at certain groups with the severity it deserves.

“There are many crimes that happen that are hate crimes and they’re not called out as a hate crime,” she said. “The first thing is to recognize what a hate crime is, and then to take the action that the law allows them to take.”

When the mosque in Toronto was vandalized six times within three months, Toronto police first said none of the incidents were to be considered hate-motivated. Following pressure from advocates and the Muslim community, the force confirmed that their hate crime unit had been made aware of the incidents and were “continuing to support the investigations as needed.”

Lawendy said her message to her fellow Muslims is “to hold your head up high, wear your hijab with pride. We are not a weak community. We are a strong community. We have a very strong faith in God.”

Previous Story
Cities, Locations and Times for the National Call to Action against Islamophobia Events
Next Story
MAC Stands in Solidarity with the Indigenous Community upon the Discovery by the Cowessess First Nation of 751 of unmarked graves