‘Get your voices heard’: Campaign seeks to drive Canadian Muslims to vote 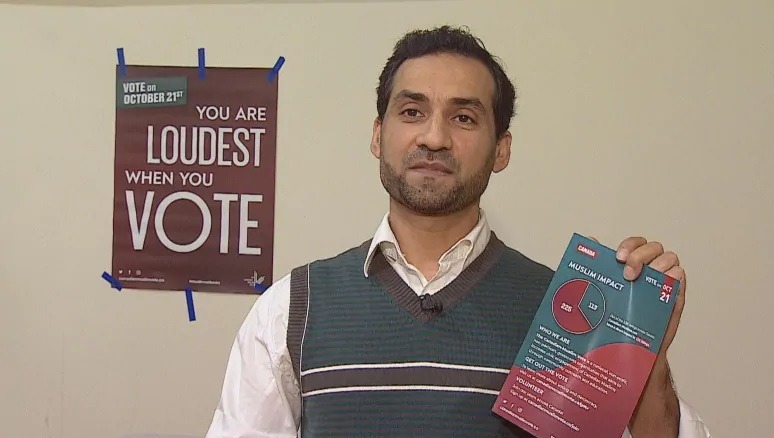 Get Out The Vote initiative hopes to mobilize Muslim voters in Calgary to hit advance polls.

Featuring “Get Out the Vote” civic engagements and sermons in more than 100 mosques across Canada, the campaign is a partnership with the Muslim Association of Canada (MAC) with a goal to mobilize Muslim voters to hit advance polls.

Ibrahim Jadalowen, a civic engagement coordinator with MAC, said the campaign was created as a way to ensure that minority rights remain upheld and protected in a period of civic and political unrest.

“We are trying to raise awareness in the Muslim communities about the issues that are facing us [and] that are effecting us directly,” Jadalowen said.

“We have seen the rise of Islamophobia and white supremacy, and issues that affect us directly, so people are looking for ways and how we can make a change and improve our lives here in this country.”

TCMV, a non-partisan organization, was founded in 2015. On its website, it describes a mandate to “educate and empower the broader Muslim community to participate in the Canadian political process.”

“Every individual has to make their own decision about who to vote for and who can represent them better in parliament,” he said.

The objective, Jadalowen said, is to encourage Muslims to engage in the democratic process and “fulfil their civic duty” as Canadians.

“A lot of minorities think that their voices are not heard and their vote will not make a difference,” Jadalowen said.

“We are trying to raise awareness that this is not the process, that’s not how it is. We want people to know that their voices can be very effective and can have a positive effect in the country.”

Jadalowen said Muslims living in Canada have the same concerns as any resident, including those surrounding the economy, employment, the environment and foreign affairs.

But as a minority population, he said it was especially important to work to preserve rights and improve community outcomes.

“I think we’re trying to focus on all types of people in our Muslim community – people who are born here, people who are not born here … a lot of them don’t give it a lot of attention because they think it’s not effective,” he said. “But we want to help them understand that this is how we make an effect in the politics of the country.”

With files from Mike Symington

Previous Story
Edmonton mosque joins over 100 across Canada for ‘Get Out the Vote’ campaign ANNA JUNKER Updated: October 12, 2019
Next Story
Join MAC’s Team for the United Way CN Tower Climb!