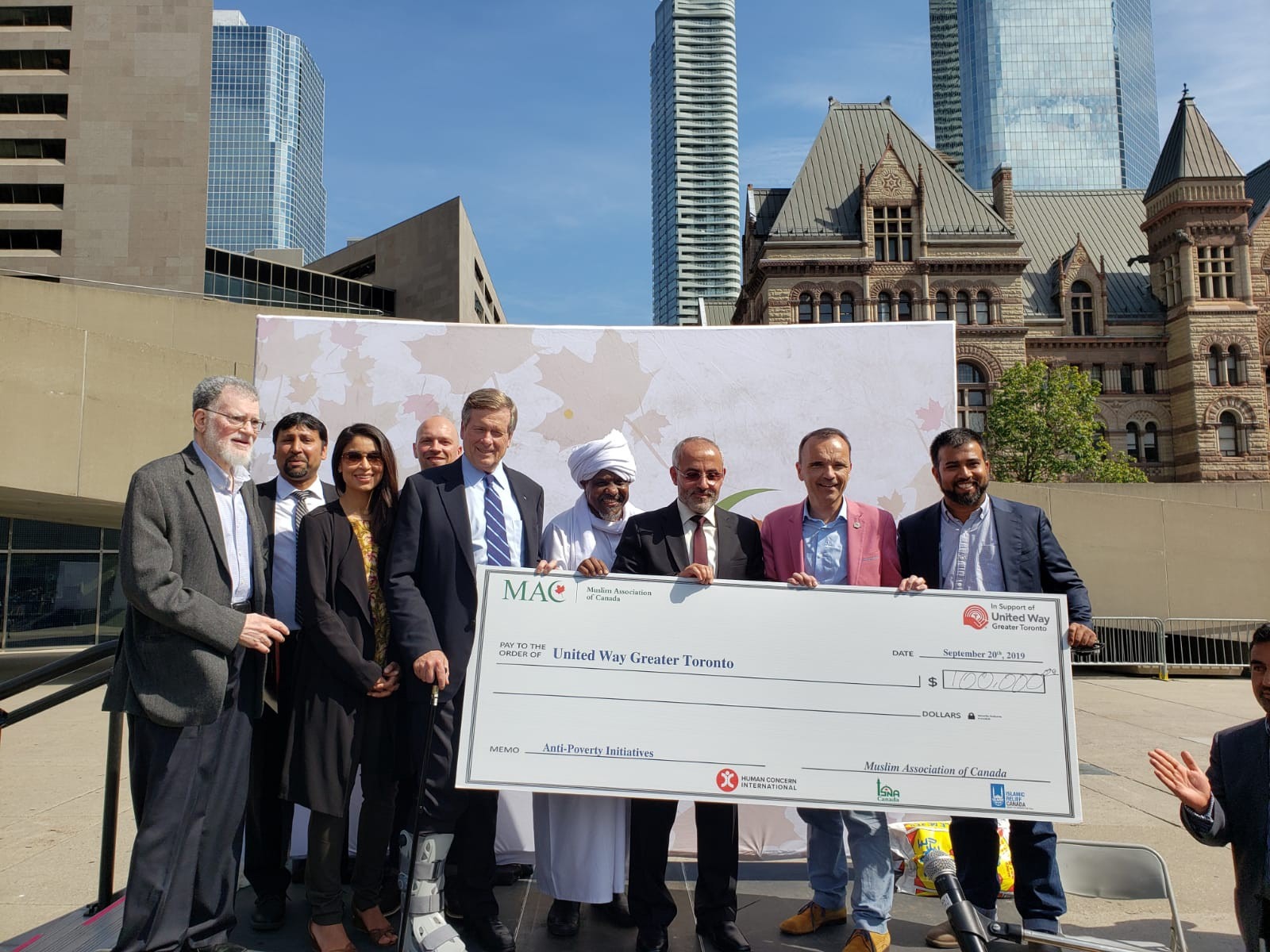 On the sunny afternoon of September 20, 2019, Muslims gathered in Toronto’s Nathan Phillips Square for an event titled Hope and Prayer in the 6ix. It was an opportunity for the city’s Muslim community, and other faith-based communities as well, to reaffirm their commitment to fighting against poverty and homelessness, both of which are on the rise in Toronto.

The event was organized by the Muslim Association of Canada (MAC). Islamic Relief Canada (IRC), one of Canada’s most prominent Muslim organizations, presented a $15,000 cheque to United Way, a charity which leads the way in this area of work. Following this, Muslims joined the traditional Friday sermon and prayer, also focusing on the importance of this cause.

It is widely recognized that homelessness is a rising challenge in Toronto. By January 22, just three weeks into the year, four homeless people had died, and there were calls for the city to declare a homelessness crisis. Approximately 9,000 people are homeless in the city on any given night. Four out of every 10 people in Toronto’s homeless shelters are refugees or asylum claimants. The disturbing statistics could go on.

In response to this situation, different sectors of the Toronto community have begun to contribute toward temporary relief for the homeless as well as sustainable, permanent solutions. For example, in September, the University Health Network set aside a $10 million parcel of land in Parkdale for an affordable housing project after noticing how many of their patients were homeless.

Libraries have stepped up as well. The Toronto Public Library has hired social workers to help the homeless who regularly find a safe haven there.

It is time for faith-based organizations to ramp up their contributions as well.

Islamic Relief Canada’s Share the Warmth campaign was in its second year in 2019 and was appreciated by many of Toronto’s homeless as it provided hundreds of warmth kits and hot meals. Every December, we also deliver holiday gifts to shelters across the city that serve the homeless. And we regularly advocate for this cause in the media and in policymaking circles.

But we recognize, and other faith-based organizations as well, need to do more. Faith communities have been involved in initiatives to support the homeless for years, in the spirit of the widely-shared emphasis on “loving thy neighbour”. However, the scale of the problem now requires not only more effort in this direction, but also more cooperation and creative thinking being put into the programs we run.

The organizers and participants in the Hope and Prayer in the 6ix event hope that it will inspire this renewed effort. We look forward to the day that every Canadian has a home where they can live a safe and dignified life — a home, in the powerful words of the Egyptian Nobel laureate Naguib Mahfouz, where all of a person’s attempts to escape cease. We are ready to work for it.

Hassam Munir is part of the External Relations team at Islamic Relief Canada.