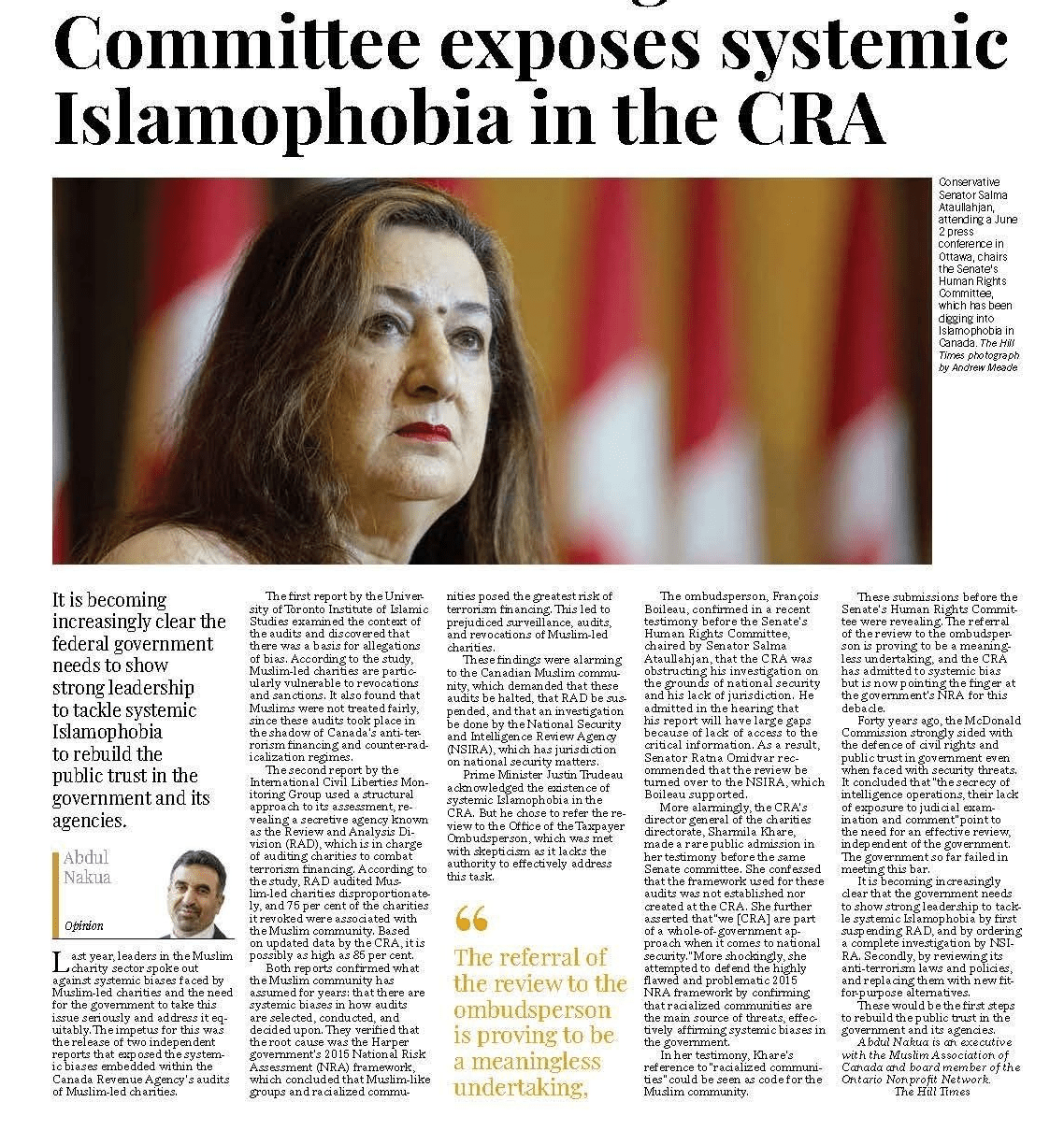 Last year, leaders in the Muslim charity sector spoke out against systemic biases faced by Muslim-Led Charities and the need for the government to take this issue seriously and address it equitably. The impetus for this was the publishing of two independant reports that exposed the systemic biases embedded within the CRA’s audits of Muslim-led charities.

The first report by the UofT Institute of Islamic Studies examined the context of the audits and discovered that there was a basis for allegations of bias. According to the study, Muslim-led charities are particularly vulnerable to revocations and sanctions. It also found that Muslims were not treated fairly since these audits took place in the shadow of Canada’s anti-terrorism financing and counter-radicalization regimes.

The second report by the International Civil Liberties Monitoring Group and used a structural approach to its assessment, revealing a secretive agency known as the Review and Analysis Division (RAD), which is in charge of auditing charities to combat terrorism financing. According to the study, RAD audited Muslim-led charities disproportionately, and 75% of the charities it revoked were associated with the Muslim community. Based on updated data by the CRA, it is possibly as high as 85%.

Both reports confirmed what the Muslim community has assumed for years: that there are systemic biases in how audits are selected, conducted, and decided upon. They verified that the root cause was the Harper government’s 2015 National Risk Assessment (NRA) framework, which concluded that Muslim-like groups and racialized communities posed the greatest risk of terrorism financing. This led to prejudiced surveillance, audits, and revocations of Muslim-led charities.

These findings were alarming to the Canadian Muslim community who demanded that these audits be halted, that RAD be suspended, and that an investigation be done by the National Security and Intelligence Review Agency (NSIRA), which has jurisdiction on national security matters.

The Prime Minister acknowledged the existence of systemic Islamophobia in the CRA. But he chose to refer the review to the Office of the Taxpayer Ombudsperson, which was met with skepticism as it lacks the authority to effectively address this task.

The Ombudsperson, Mr. Francois Boileau, confirmed in a recent testimony before the Senate’s Human Rights Committee, chaired by Senator Salma Ataullahjan, that the CRA was obstructing his investigation on the grounds of national security and his lack of jurisdiction. He admitted in the hearing that his report will have large gaps because of lack of access to the critical information. As a result, Senator Omidvar recommended that the review be turned over to NSIRA, which he supported.

More alarmingly, the CRA’s Director General of the Charities Directorate, Sharmila Khare, made the rare public admission in her testimony before the same Senate committee.  She confessed that  the framework used for these audits was not established nor created at the CRA. She further asserted that “we [CRA] are part of a whole-of-government approach when it comes to national security.” More shockingly,  she attempted to defend the highly flawed and problematic 2015 NRA framework by confirming that racialized communities are the main source of threats, effectively affirming systemic biases in the Government.

Abdul Nakua is an executive with the Muslim Association of Canada and board member of the Ontario Nonprofit Network.