‘Celebrating with sadness’: Muslims in Canada mark sombre Eid, some without health restrictions 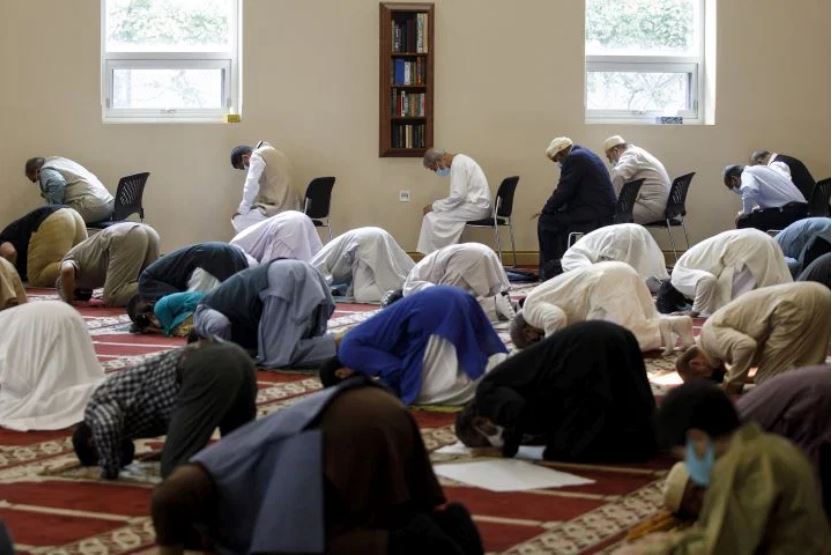 Haseeb Azhar says it felt odd hugging a Muslim co-worker and friend in Edmonton as he wished him a happy Eid.

“Some people were hesitating — it felt very weird,” said the manager at a steel manufacturing company.

“Since it was a weekday, I had to go back to work after to finish up my meetings. Later we’re gathering with family and friends and celebrating without any restrictions.”

Muslims across Canada are celebrating a sombre Eid-ul-Adha this week as some gather in person for the first time since the pandemic began, while others continue commemorating the festival while maintaining a safe distance.

Azhar’s wife, Amanah Khursheed, says it’s been difficult to celebrate the four-day festival as attacks against Muslim women rise in parts of the country and after a Muslim family was killed in broad daylight during a walk in London, Ont., last month.STORY CONTINUES BELOW ADVERTISEMENT

Terrorism charges have since been filed against the man who police say targeted the family with his truck because of their faith.

Elsewhere, at least 10 Black Muslim women have been attacked in Edmonton since December 2020. Police have also received at least three reports of attacks against Muslim women in Calgary. A majority of them wore a hijab.

But Azhar and Khursheed have been gathering with loved ones for Eid.

“There’s definitely more appreciation,” Khursheed said as the smell of biryani, kebabs and naan filled the room around her. “The kids are overwhelmed and excited that we’re having people over.”

Unlike her husband, she’s not sure she is ready to hug people — despite all COVID-19 health restrictions being lifted in Edmonton.

But she’s excited to finally share a home-cooked meal.

“There’s an abundance of food,” she said. “The company and the food together is amazing after so long (but) we still want to be careful and make sure everybody’s safe.”STORY CONTINUES BELOW ADVERTISEMENT

While the family is inviting guests into their home, Nazreena Anwar is celebrating Eid in the Rockies with her husband.

“We’re camping and hiking,” she said during their drive toward Jasper, Alta.

“I’m glad the world is slowly getting back to normal but, truthfully, I’m a bit concerned still about the virus. That’s why we’re going to reflect and pray to God in the mountains.”

Eid-ul-Adha translates to the “festival of the sacrifice.” It marks the end of Hajj, the five-day pilgrimage Muslims undertake to cleanse the soul of sins and instil a sense of equality and charity.

It also commemorates the sacrifice made by the Muslim Prophet Ibrahim when his faith was put to the test and he was commanded by Allah to sacrifice his son, Ismail. During the festival, Muslims sacrifice an animal — usually a goat, sheep or cow — and distribute the meat among family, neighbours and the poor.

Rania Lawendy, a council member of the Muslim Association of Canada, says Muslims are drawing from Ibrahim’s lessons of sacrifice, charity, and togetherness to tackle the growing challenges the community has been facing.

“We are celebrating with a bit more sadness with everything that’s been going on,” she said.

“People are happy but they’re also solemn. We can’t forget. We know there’s a lot of things happening (and) that Islamophobia is on the rise.STORY CONTINUES BELOW ADVERTISEMENT

“We want to see the landscape shift in Canada. This is not the Canada we know and love. There’s a lot we can do to end systemic xenophobia and there’s a lot of Muslim leaders pushing the government. And the government, hopefully, will respond in a very positive way.”

In Ontario, where some restrictions remain, she said about 6,000 Muslims were able to gather for the first time at Ontario Place to commemorate the festival.

She said the association’s 13 mosques across the country also held usual prayers, where some were able to kiss and hug one another. Others maintained a two-metre distance that’s become normal now, she said.

Lawendy said many stayed after prayers to discuss the 61 calls to action recently released by the National Council of Canadian Muslims.

The list of policy recommendations for all three levels of governments in Canada address violent and systemic forms of Islamophobia.

The council is hosting a national summit to address the recommendations Thursday.

“I would encourage everyone to wish someone a happy Eid,” Lawendy said.

“We all want to live a good life, be decent people and build a great country for our children, and that takes sacrifice. That’s really kind of the theme of Eid too.”