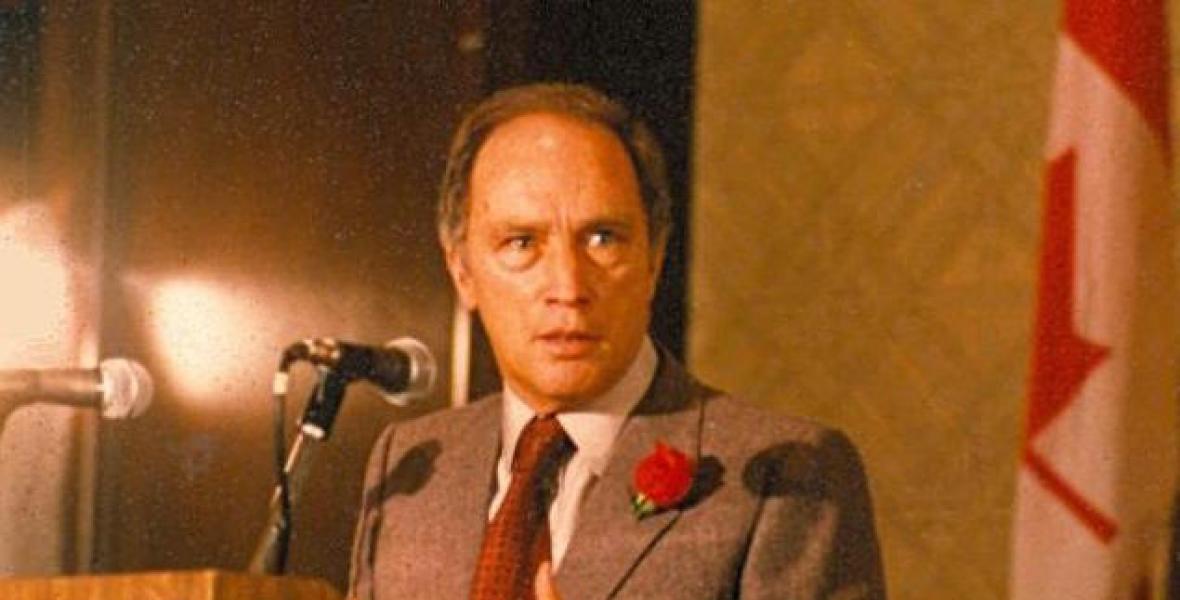 Reflecting on the divisive debate in Quebec about religious symbols and the passing of Bill 21, I remember an epiphany which reveals how old battles are influencing new ones. It was an interview with former prime minister Pierre Trudeau by Barbara Frum, aired by the CBC on May 29, 1987. As a new student starting my studies with limited English comprehension in northern Ontario, I was fascinated by Trudeau’s vision for the country, and his focus on the absolute importance of the federal government’s role in protecting individual rights. That moment opened a window onto a unique experience of the country, leading me to adopt Canadian culture as my own, and to learn more about Canada’s history and its fascinating politics.

As for the impact of that interview on Canada, it still lingers to this day. Back then, it was the closest thing to divine intervention in the ratification of the Meech Lake Accord (a constitutional amendment articulated by then prime minister Brian Mulroney to win Quebec’s consent to the 1982 Constitution). Its central article was the inclusion of the “distinct society clause” to define the province of Quebec.

Following that interview, Trudeau wrote an op-ed published by both the Toronto Star and La Presse. In it, Trudeau fiercely defended his vision of the country — one “based on a bilingual multicultural Canada with strong central government where individual Canadians possess defined rights, and no province or region has a special status.” He summarized his main objections to the accord in two points: the equality of provinces is no longer guaranteed by virtue of creating a constitutionally sanctioned asymmetric federalism where one province enjoys more powers than the rest and creating an imbalance between the collective and individual rights in favour of the majority. “For those Canadians who dreamed of the charter as a new beginning for Canada, where everyone would be on an equal footing, there is to be nothing left but tears,” he wrote.

At the centre of this epic constitutional clash were two articles in the accord: paragraph (1)(b), “the recognition that Quebec constitutes within Canada a distinct society” and article (3), which held that “the role of Quebec’s legislature and government is to preserve and promote the distinct identity of Quebec referred to in paragraph (1)(b) is affirmed.”

The term “la societe distincte” is a relic of the Quiet Revolution as an expression of Quebec nationalism. It entered the Canadian political lexicon in 1963 as part of the Royal Commission on Bilingualism and Biculturalism, and became an article of faith for Quebec’s political elite.

Through sheer intellect and charisma, Trudeau almost single-handedly galvanized opposition to the accord and defended his vision as a loftier moral alternative. Realizing he was outmaneuvered and outwitted, Mulroney rolled the dice in the dying days of the campaign to save it, but failed to get the accord ratified.

After the failure of the Meech Lake Accord and the rejection of the Charlottetown Accord in a national referendum, followed by the scare of the 1995 Quebec referendum on sovereignty, then prime minister Jean Chrétien recognized there was no realistic path to a constitutional agreement. He sought to tackle Quebec nationalism using an unorthodox approach, by bringing clarity to the question of secession and raising the threshold for a yes vote in a referendum. The federal government sought an opinion from the Supreme Court and subsequently introduced the Clarity Act in 1999, which became law in 2000, making the secession question almost an impossible eventuality.

The Quebec political elite pivoted the nationalism conversation from the distinct society debate to a new frontier of protecting “laicity” — the secular character of society — advancing a new discourse about religious symbols and their space in the public sphere.

After the embarrassing Hérouxville “code of conduct” debacle and the farcical reasonable accommodation debate, successive Quebec governments became obsessed with “religious symbols in the public sphere,” introducing five bills within 10 years: Bill 94 in 2010, followed by Bill 60 in 2013, Bill 62 in 2017, and finally Bill 21 — a draconian piece of legislation with an Orwellian spin, as it was authored and sponsored by the minister of immigration, diversity and inclusion.

Quebec nationalism is ethnocentric in character and form. It is an extension of French nationalism — both proudly projected as exclusive and anchored in secularism, which views “any form of difference operating as a threat to that identity.” It is a form of ethnonationalism constructed in the late 1970s and early 1980s, in which it is argued that mixing different ethnicities leads to extinction of the principal culture. Therefore, the thinking goes, European national cultures have the right to protect their cultural identities against threats. Allegedly then, the greatest threat is defined as an invasion of immigrants, particularly from Muslim countries, because “they are the least compatible and the least inclined to assimilation.”

In Quebec, a discourse of French secularism combined with gender equality to frame Muslims as the threatening “other.” Because of its visibility and cultural specificity, the hijab provided the required imagery and language to activate this framing as a mobilizing instrument.

The discourses around the hijab, religious symbols, reasonable accommodation and charter values were filled with historical omissions, generalizations, and erasure of voices, which ensures their potency. The hijab was reduced to a mere religious symbol. In the process, Muslim women became viewed through the prism of gender oppression, and their needs and aspirations were obscured just as their voices were silenced. Consequently, the rich and meaningful lives that Muslim women lead and their self-actualization through a wide variety of pursuits were rendered invisible by these reductionist discourses. The deep spiritual value of the hijab was omitted from public discourse and the voices articulating those powerful aspects were likewise erased. Moreover, when Muslim women’s voices were included, it is done selectively. Space was only allotted for the voices of the “native informants,” to the exclusion of others, only to further modulate a victim discourse around women. They were projected as the “accredited insiders,” able to clarify and authenticate the “centre and periphery” paradigm with relation to the West and Islam.

As Muslim women found success in their pursuits, this increased their visibility and invited the state to shrink the public space through exclusionary practices to limit accessibility to sporting opportunities, career choices, or even voting rights. At the same time, the state uses the visibility of Muslim women as a marker perceived and consumed through the historical aperture of colonization to advance its cultural and political agenda.

In her essay “Five Faces of Oppression,” philosopher Iris Marion Young identified violence, exploitation, marginalization, powerlessness, and cultural imperialism as ways oppression is communicated and expressed. Laws like Bill 21 can generate unquestioned norms, habits, and symbols, leading to societal rules that become a restrictive structure of forces and barriers. These immobilize and reduce a group or category of people, and oppression is perpetuated by blind obedience to such institutional norms. This form of disenfranchisement can greatly impact Quebec’s democratic institutions and traditions.

Worried about these tendencies, Trudeau advocated for the supremacy of the charter. He was never in doubt that the adoption of the “distinct society clause” would weaken the charter and create a constitutional pretext where individual rights could be unduly limited by the majority. He asserted that this clause is “a racist notion” that would make “second- or third-class citizens of everyone but ‘old-stock’ Quebecers.”

Because of Trudeau’s principled leadership more than 30 years ago, Bill 21 carries with it the sin of overreach and abuse of constitutional norms as it was passed under the notwithstanding clause — to circumvent protections under the Charter of Rights and Freedoms and to protect it from court challenge.

As time passes, it is becoming clear that Trudeau’s vision of the country has withstood the test of time. It has resisted the temptation to dilute the premise of the inherent, equal value of every Canadian citizen. As the shadow of Trudeau fades into the distance of time, he will be remembered as the leader who best expressed the potential of this country. We can honour his vision by correcting one of the charter’s major flaws — the notwithstanding clause — and amending the charter to remove it. Achieving this would move us closer to completing what John Ralston Saul called the “perpetually incomplete” Canada experiment — “one based on the idea of an inclusive circle that expands and gradually adapts as new people join us,” a circle much bigger and more inclusive now than when I joined it.

Abdul Nakua is a community organizer, activist, and a proud Canadian, Ontarian and Muslim. He is an executive with the Muslim Association of Canada.

MESSAGE OF THE EXECUTIVE DIRECTOR

Asalamu Alaikum Wa Rahmatullah, InshaAllah each of you, your families...

SearchPostsLoginCart
MAC Give Food Share Campaign
MAC Give Organizing Blood drive with Canadian Blood Services
Response to a Smear Campaign in Relation to Action Against Employees Breaching Contractual Agreements
Unique challenges faced by Black Muslim community warrant better understanding, attention
Ibrahim Arid
MESSAGE OF THE EXECUTIVE DIRECTOR
The Pandemic Can Bring Us Together In Service—Let’s Start By Giving Blood
As we reclaim our narrative, we must stand firm and proud to our values, traditions and histories