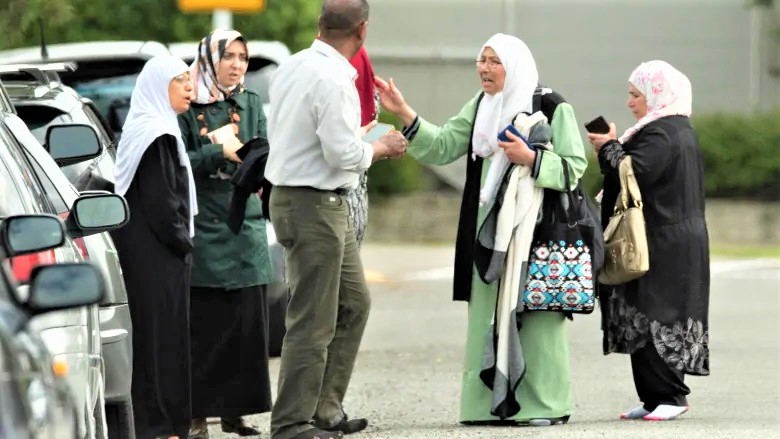 ‘Afraid for the safety of loved ones? I am,’ wrote Fauzia Mazhar with Coalition of Muslim Women

An interfaith vigil at Kitchener city hall hopes to show support for victims and survivors of attacks at two mosques in New Zealand.

There were 49 people killed and another 48 injured after shootings at two mosques in Christchurch during Friday prayers.

Leaders in Waterloo region and surrounding area who woke up to the news of the attacks pledged their support for people half a world away.

“Today, our global family shares in your grief and in remembering that #LoveBeatsHate,” he wrote.

The love & support of the people of @CityKitchener stands with the people of @ChristchurchCC & especially the families & friends of the 49+ victims of today’s tragic #ChristchurchMosqueAttack. Today, our global family shares in your grief and in remembering that #LoveBeatsHate.1494:50 AM – Mar 15, 201945 people are talking about thisTwitter Ads info and privacy

My heart goes out to the victims, friends, family, and the first responders in Christchurch. Hate has no place in this world. I stand with the local Muslim community and all Waterloo citizens against Islamaphobia and this act of terrorism. #NewZealandStrong #LoveBeatsHate969:41 AM – Mar 15, 2019Twitter Ads info and privacySee Dave Jaworsky’s other Tweets

Like many of us, I’m just now awaking to hear of the madness from #ChristChurch. 49 dead for nothing. For worshipping. For being Muslim. #Guelph stands against any and all evil acts of terror like what was conducted and stand in solidarity with @MSOFG_SM today.1217:51 AM – Mar 15, 2019Twitter Ads info and privacy21 people are talking about this

K-W’s Fauzia Mazhar with the Coalition of Muslim Women wrote an impassioned Facebook post, saying it was “hard to describe the feelings.”

“Sad for the hate that human beings are able to fester to the extent that they kill other human beings, often complete strangers who have done nothing wrong,” she wrote. She called out politicians who use Islamophobia and racism to gain power.

“Afraid for the safety of loved ones? I am.”

The Kitchener Masjid retweeted a statement from the Muslim Association of Canada, which said they are “left speechless” by the attack.

We are left speechless at the #NZMosqueShooting, our hearts & prayers go out to the victims & their families during this unspeakable tragedy. We are united with you dear Brothers&Sisters. An attack on faith institutions is an attack on us all. #Christchurch #United #Faithful 2811:19 PM – Mar 14, 2019Twitter Ads info and privacy16 people are talking about this

Those of us who saw the news late night spent all night following news and praying for lesser loss but our worst fear came true. A lot of anxiety and fear among local worshipper as Schools are out yet full of trust that our local Guelph community stand with us. @CamGuthrieDominique ORourke@orourke_ward6I can’t find the words to express my horror, just deepest condolences for Christchurch, muslims globally and @MSOFG_SM. There is no room for this hatred. https://twitter.com/MSOFG_SM/status/1106427865413943296 …1238:04 AM – Mar 15, 2019Twitter Ads info and privacy32 people are talking about this