MAC Admin
In the News 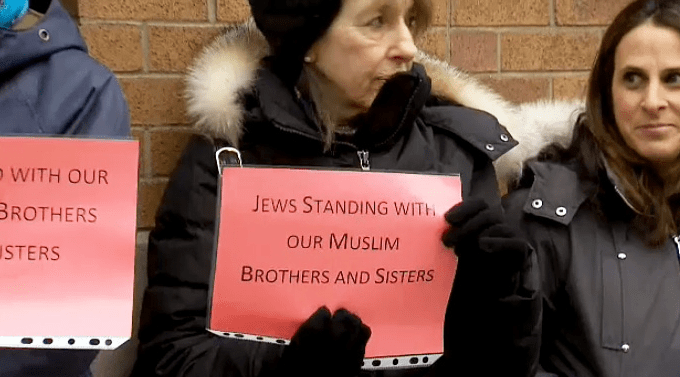 One week after a mass shooting at two mosques in New Zealand, people of all faiths formed “rings of peace” around mosques across the GTA.

Holding hands and carrying signs of peace, supporters lined the perimeter of Masjid Toronto on Dundas Street this morning to show solidarity with the local Muslim community in the wake of the tragedy overseas.

The ceremony was meant to symbolically show protection for those praying inside and was just one of about 13 planned on Friday.

Torontonians stand in solidarity with members of the Muslim community one week after the terror attack in New Zealand left 50 dead and dozens more injured.

“Friday is the Muslim Sabbath, a day of special prayers, so we want to come out and show our support and solidarity for our Muslim brothers and sisters,” Rabbi Ed Elkin, the rabbi of First Narayever Congregation, said.

“We feel as a minority religious group that there is a rise in hatred, sadly, in the last few years, particularly white supremacy. We the Jewish community has been victims of it, the Muslim community have also been victims. We realize we have a shared interest in support each other and beyond that, from a religious point of view, we’re all children of God, we’re all created in God’s image, and even just as human beings you want to show love and support.”

Reverend Maggie Helwig of St. Stephen-In-The-Fields Church said the attack in New Zealand left her “appalled” and that support from all faiths is necessary for healing.

“I’m here to show my support and solidarity for the people at the Masjid in particular, many of whom are friends of mine, they do a meal for the homeless at my church, we have a long relationship,” she said.

Last week, a gunman walked into a pair of mosques in Christchurch, New Zealand and opened fire, killing 50 worshippers and injuring many others.

Thousands of New Zealanders observed the Muslim call to prayer on Friday, followed by two minutes of silence.

Imam Yusuf Badat of the Islamic Foundation of Toronto said the community is heartened by the widespread support.

“It feels amazing because people don’t share our faith, but they realize our pain,” he said. “They realize the difficulty that the community is going through and this is a sense of hope and prosperity for us.”

He later sat down with members of the mosque between prayers to listen to their concerns and offer his support.

“The messages coming out of this are many. Certainly messages of horror for what happened, messages of grief for what happened to the innocent people that were in a place that was supposed to be of peace, praying,” he said. “But also messages that say, we must resolve ourselves as Torontonians to say that we’re going to continue to build something that’s different here, to pursue a noble idea that says that we live together here and celebrate each other’s differences.”

Tory acknowledged the services Baitul Islam Mosque, along with many other mosques in the region, provide the city and its residents, such as senior programs and aid for the homeless.

“It’s an extraordinary amount. These are things that contribute to the strength of our community as a whole. It’s still an underappreciated, untold story,” he said.

“We have to tell these stories so that people who might be inclined to fall into the trap of thinking in a stereotypical way about people of the Muslim faith stop thinking that way because these are good people, they’re good parents, they’re good citizens.”

Ceremonies were also held this afternoon at Islamic Society of Ajax, Taric Mosque in York, and at the University of Toronto’s St. George campus.

More and more during the pandemic, young people are turning...