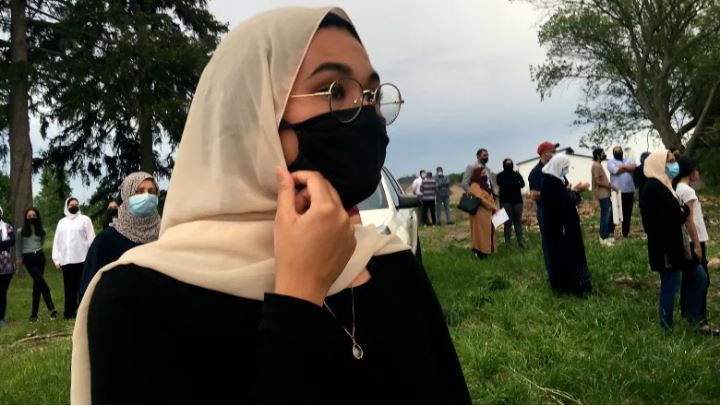 Muslims in London, Ont., are reeling after three adults and a teenager were killed in what police say was a targeted hit-and-run attack.

Police charged a 20-year-old man with four counts of murder and one count of attempted murder on Monday in what they say was a “planned, premeditated act” against a family of five “because of their Muslim faith.”

A nine-year-old boy, who survived, remains in hospital with serious but non-life threatening injuries.

Ijlal Hossain said the incident hit close to home for her, as a visible Muslim who lives down the street from where the family was struck on Sunday.

“My family, my little sister, my parents, we walk here all the time. And to think that something so horrendous can happen so close to home … it’s really heartbreaking,” Hossain told CBC News while attending a memorial at the scene in northwest London.

“I think it really shows that we don’t know what to expect, in literally broad daylight,” she said.

Saboor Khan, head of London Muslim Association of Canada, was close to the victims.

“I am devastated, I am not able to focus very well,” Khan said. “I am afraid for our children, I’m afraid for my community, anyone who wears the hijab, anyone who dresses in a traditional Muslim way.”

“This was an act of terror, and it has really really, frankly terrorized our community.”

Preemptive steps must be taken to prevent hate crimes from occurring, including calling out “discrimination, racism, Islamophobia, any other form of xenophobia, for what it is,” said one community faith leader.

“The impacts of this are going to be vast and wide on our community just in terms of the level of shock that such an egregious crime takes place in our city,” said Imam Abd Alfatah Twakkal.

“This is not the first time where such crimes that are hate-motivated, based on a detesting of Islam and of Muslims. This is Islamophobia. We call it for what it is.”

Twakkal said he knows the victims but has been asked by family to refrain from speaking about them at this time.

Hassan Mostafa, who is on the board of directors of the London Islamic School (LIS), said Monday was an “extremely difficult” day.

School has been cancelled for all students on Tuesday, he said at a virtual town hall that evening.

“We want to allow the grieving process to take place … [It] will be a day of planning in order to start providing services to our students, our families, and to our staff to help with the grieving.”

He said exams, which were supposed to start Monday, have also been cancelled for students in Grades 7 and 8 for the rest of the year.

Mostafa said the school has been offered support from several organizations, including the London police’s crisis intervention unit.

While LIS is not part of the Thames Valley District School Board (TVDSB), Mostafa said its board of education is also offering support, both short- and long-term, to all students.

2 months ago2:03Canada’s Muslim community is grieving yet again after a fatal attack on a Muslim family in London, Ont., and a reminder of the country’s dark, recent history of Islamaphobic violence. 2:03

On Tuesday, TVDSB grief counsellors will meet with LIS teachers to create class presentations and will make one-on-one counselling available to students by request.

The Muslim Resource Centre for Social Support and Integration, will be involved in the planning for the support to ensure it is done in a culturally sensitive way, Mostafa said.

The National Council of Canadian Muslims is also providing resources to the LIS community.

“It’s important that we all console each other and work with each other,” Mostafa said.

A community vigil is planned for Tuesday at 7 p.m. outside of the London Muslim Mosque in the parking lot. Mostafa said the mosque expects several thousand to attend.